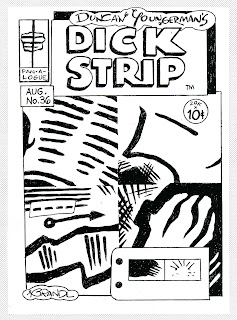 This was done for my friend, the wonderful French and American contemporary music composer Duncan Youngerman. We did several things together, particularly an exhibition and concert in 2001in Espace Lhomond in Pari, France. His compositions were dedicated to superhero comic artists we both admired. My works in the show were as well. We both merged them with our more experimental concerns. It was wonderful. I made a large painting of this as well on a roll-up projection screen, so he could have as a backdrop for when the works were played. When I think of it now in 2019, I realize it prefigures my current Dr Great Art work!

Here is a bad Polaroid (remember those?) of it: 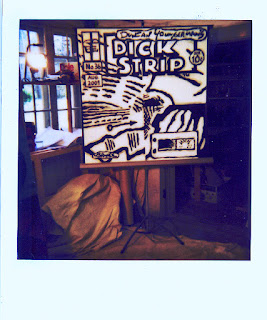 Concerning the show from the press release:

"From Thursday April 5th through Sunday April 8th the gallery Espace Lhomond in Paris, France will feature the visual art works of U.S. and Swiss painter Mark Staff Brandl as well as the music of U.S. and French composer Duncan Youngerman. Brandl is exhibiting large paintings and a site-specific painting-installation. Youngerman is presenting a concert of five new compositions, to be performed live by two saxophonists on Thursday night, April 5th, from 6 p.m. to 9 p.m. The two performers, Sascha Armbruster and Beat Kappeler, are both members of Basel's Arte Quartett. Brandl and Youngerman share a similarity of inspiration and their respective works are mutually complementary. This show is additionally a foray into potential future collaborations for the pair.

Born in 1955 near Chicago, Brandl has been living and working primarily in Switzerland since 1988. Active internationally as an artist since 1980, Brandl has won various awards, had many publications and numerous exhibitions. His shows include galleries and museums in Switzerland, Italy, Egypt, the Caribbean, Chicago, Los Angeles and New York. Brandl has recently had three of his art works purchased by the Art Museum of St. Gallen, Switzerland and one acquired by the prestigious Victoria and Albert Museum in London, England. As a critic, he is a frequent contributor to New York’s Art in America and London’s The Art Book.

Youngerman, born in Paris in 1956, has lived and worked in the United States and France. He toured as electric guitarist with the Rhys Chatham Ensemble between 1988 and 1991. In 1989 he received the prize "Bourse Leonard de Vinci" for composition from the French government. His works have been performed in Europe, the U.S. and Japan by, among others, Group 180, Ensemble Modern, North-South Consonance, Asko Ensemble, Arte Quartett, Masataka Hirano, and (ex-Kronos Quartet cellist) Joan Jeanrenaud.

The link between these two artists of such different mediums as painting and music is the inspirational importance for them of the American comic book as experienced in their childhoods in the 1960s. For both these expatriates, this generally "untouchable" art form has become a rich source for achieving greater immediacy both within and without the accepted esthetic confines of "High Art," as well as a vital connection to their cultural roots. Brandl and Youngerman first became acquainted and discovered their creative affinity when both had theoretical articles exploring these notions published in the same magazine, The Jack Kirby Collector.

Here is a review from a French puböication, "Nouvelles rive gauche" 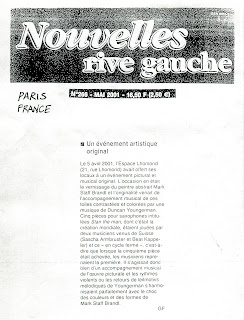 And here is an article in German about it from "Saiten": 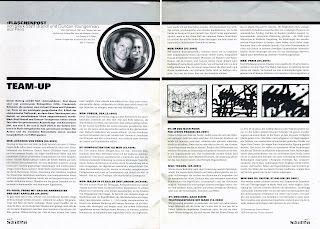 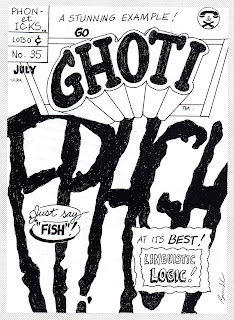 This is "Covers" work Nr. 35 --- ink and gouache on paper. 21 x 15 cm / 8.25 in x 6 in. Dated July, 2001. "Go GHOTI." Price "Lotso ¢." In the company box: "PHON-et-ICKS tm" In the drawing caption box left "Just say "FISH"! In the drawing caption box right: "At its Best! Linguistic Logic!" Under the date, a very tiny: "V, F, PH" (refering to German). In the circle top right: an image of an old-style telephone receiver, ampersand and a cross-out-'x.' The apparently abstract image is actually a close-up, enlarged image of very small sketched "FPHGH" by me. "GHOTI" is a artificial word created to display the irregularities in English spelling from a phonetic point of view, thus pointing out some silliness to learning phonetics, although I always enjoyed it. Attributed often to George Bernard Shaw, he himself attributed it to an annoymous spelling reformer. This is for my sister Marcia Brandl Willhite, who always found teaching and learning phonetics to be pointless. tm, (c) 2001 MSB
Posted by Mark Staff Brandl at 7:06 PM No comments: 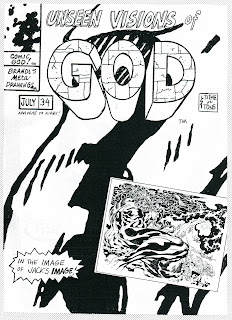 This is "Covers" work Nr. 34 --- ink and gouache on paper. 21 x 15 cm / 8.25 in x 6 in. Dated July, 2001. "Unseen Visions of God." Price "$ Tithe or Tons." In the company box: "Comic God! Brandl's Meta-Drawings tm." In the drawing caption box: "In the Image of Jack's Image." Under the number box: Apologies to Kirby! The inset image is of a drawing the great comic artist Jack Kirby made. The apparently abstract image by me is actually a close-up of a detail of a part of Kirby's drawing.
Posted by Mark Staff Brandl at 6:35 PM No comments: 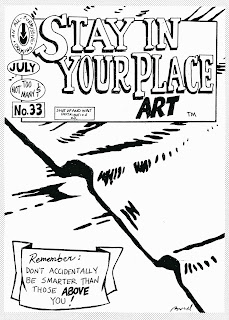 This is "Covers" work Nr. 33 --- ink and gouache on paper. 21 x 15 cm / 8.25 in x 6 in. Dated July, 2001. "Stay in Your Place Art." Price "Not Too Many $." In the company box: "An All-Submissive Drawing." "Shut Up and Wait Distrubition Co." In the drawing caption bx: "Remember: Don't Accidentally Be Smarter Than Those ABOVE You!"The apparently abstract image is actually a close-up of a detail of a drawing of the edge of a carpet (under which things could be swept, so to speak.)

Posted by Mark Staff Brandl at 2:29 PM No comments: 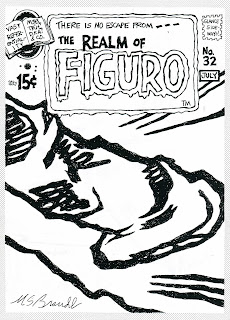 
Posted by Mark Staff Brandl at 8:58 PM No comments: 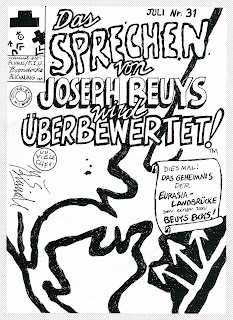 This is "Covers" work Nr. 31 --- ink and gouache on paper. 21 x 15 cm / 8.25 in x 6 in. Dated July, 2001. "Das Sprechen von Joseph Beuys wird überbewertet!" ("The Words of Jospeh Beuys are Overvalued!")  "Deismal: das Geheimnis der Eurasia-Landbrücke von einer von Beuys Boys!" ("This Time: The Secret of teh Eurasia-Landbridge from One of Beuys's Beuys!") Price "Uu-viele CHFr." ("ooooh- a lot of Swiss Francs.") In the company box: "A Personal Neo-Fluxus / F.I.U. Boondocks Zeichnung." My signature mimics his.

I am an admirer of the artist Joseph Beuys, I even built an installation and did a performance of his at his behest at ISU. I was riffing here on his famous performance where he says the same about Marcel Duchamp's Silence. The interesting part is that i did a latter version of this on one of his woodblock postcards as well. Anyway, other German-speaking fans of Beuys who saw either of the two works were irate with me about it! They felt it was correct to for Beuys to criticize Duchamp, but that Beuys cannot be criticized. I, of course, was criticizing both as well as honoring them by staying within the dialogue, making an homage. Amusing. One as an artist gets either detractions or exaggerated nobility, rather than real understanding and thoughtfulness. He is and was a great artist, not a saint. Stop quoting him emptily and start treating art itself with the value he did.
Posted by Mark Staff Brandl at 12:10 PM No comments: 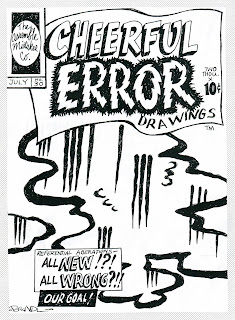